Is there any finer and more relaxing pastime than completing a Jigsaw? If there is I don’t know about it. Whether you’re a person who likes a quick 500 piece walk in the park or a veteran of the 5000 piece variety you’ll know the sense of fulfilment and joy when you slot in that last piece and see the finished product. Some people even stick them up on the wall after they’ve finished it. One of the best ways to completing your jigsaw is with your own Lap Trays. You can sit anywhere with one and begin your quest to complete the Jigsaw. Check out https://personalisedlaptrays.co.uk/collections/lap-trays to have a look. You can even personalise them.

The Jigsaw remans one of the most popular pastime and it is enjoyed throughout the world. It starts as a great educational tool for children as it teaches them to think abstractly for the first time and visualise. It also increases their hand eye coordination and their ability to plan ahead. So, there is a lot more going on when you’re sat with them sorting out that Thomas puzzle than you actually realise. Of course, this is just the start. When set on this course they may well graduate onto what was reputed to be the hardest Jigsaw ever. This was basically a picture of Baked Beans. How was the jigsaw puzzle first thought off?

It was in 1760 that the cartographer John Spilsbury hit on a novel idea of selling more prints to the public. He also saw that it could have educational purposes and so he chose a map of Europe as the first one. Originally made of wood, Spislbury took a painting and when it had dried he cut the pieces out with a Jigsaw. He then boxed this up and sold it as a new and exciting past time. Plus, it was a way of owning the art. It was a massive hit in London and the idea soon spread throughout the country and subsequently abroad. Whilst the first were made of wood the norm is now to use cardboard. The first images were pretty simple and repetitive. Now however you can actually choose whatever image you would like. Companies now provide a personalised service but there are a variety of images that you can choose from. 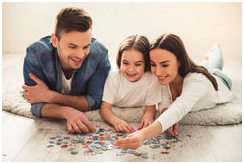 What are the most popular images? Unsurprisingly they are nature photographs and that of landscapes. Castles and buildings come next. Strangely though the use of a repetitive image is popular, though these are very hard. There have been several extensions of the puzzle idea. One has featured an accompanied book that you have to read to discover which pieces fit to complete the image. The other is the humorous Wasgij. This has an image on the box, but this is not the image you have to complete. Sometimes it’s what happened after the event depicted on the box, or the image is the view of what the subject of the Jigsaw can see. Good luck.