When you’re a kid, a ride in a taxi cab is a super adventure and really exciting, especially if you’re off on holiday and taking a taxi to the airport or train station. It’s a luxury for many people and probably the closest us normal folk will ever get to having our own personal chauffeur. Riding in a taxi is still an exciting and interesting experience, especially for those of us who have good memories of traveling in them. Of course you don’t want the excitement to be marred by a broken down vehicle or worse one that is not road legal so checking your cars with an MOTs Gloucester company such as 123carandcommercial.com is a must.

It makes me wonder about songs involving this particular form of public transportation so here’s a look at some of the songs where even rich and famous artists found subject matter in that shared experience of riding in a cab.

Annie Christian (written by Prince): Prince declares in the chorus of this song that he seems to spend his life living in taxicabs. It seems to be a metaphor for something deep and dark that was troubling the artists and it has been said that Prince wrote this song after learning of the death of John Lennon.

Harry Chapin, ‘Taxi’: For this song, the writer came up with a story of a late-night run-in with an old flame while driving a taxi through the rain in San Francisco. It’s a classic example of the storyteller mode of songwriting, akin to Bob Dylan.

Vampire Weekend, ‘Taxi Cab’: This is a classic heartbreak, break-up song and the singer here recalls a specific experience with a lost love, getting out of a taxi and seeing her wonderful life in a gated community. The words seem to portray the feeling that the relationship ended because she was a “real aristocrat” and therefore too good for him. He blames her, he blames himself, and it amounts to a very mature look at the failings of a relationship.

Joni Mitchell, ‘Big Yellow Taxi’: This is probably one of the most famous and well-known songs featuring a taxi. ‘They paved paradise and put up a parking lot’ sings Mitchell on this track and clearly it was mostly an environmentalist protest song. Sadly, she once revealed that the title refers to the day that a big yellow taxi arrived at her home and took her father away from her. 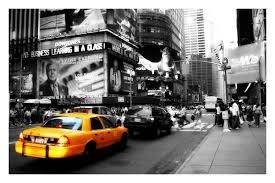 Prince, ‘Lady Cab Driver’: A Prince song again, it seems he had quite a fascination with cabs. The lyrics to this one suggest that after being picked up by a lady cab driver, Prince gets involved in some romantic activity with her.

Tori Amos, ‘Taxi Ride’: Amos gets pretty deep on this track and uses the imagery of an insignificant taxi to highlight injustices in society. This story is about a friend of hers who was dying and the world’s uncaring attitude towards him, treating him like just another faceless taxi flying by. The song is a judgment on society’s attitude who don’t care for those who are dying but only for the money they leave behind.