It’s a traditional view  of the American west of a madly chaotic land peopled by Cowboys, gunslingers and general lawlessness and when women were reduce to saying things like “well I do declare”. Its Wells Fargo coaches, fighting “injuns”, Billy the Kids and General Custer along with Rodeo riding. It’s a rich story but the reality is somewhat different form the glamorised view we see on film and in merchandising.

To ride your own rodeo take a look at the website of rodeo bull manufacturer http://www.gsrodeobulls.com/

Its not possible to go through the whole history of it. The popular image is centred around the Midwest, Great Plains and Rocky Mountains. The conquest of the native Americans around this area is covered massively. What should be noted is the Wild West or Frontier America was a culmination of many ideas and factors. Firstly, it is the tale of the waifs and strays of Europe coming by choice or by necessity to settle and define a new land. Albeit at the expense of the original populace. The fact that many who came did so due to inopportunity or persecution at home makes the subjugation and in some cases extermination an interesting conundrum. It was not a case of Cowboys marching into a town. The west was one through diplomacy, a keen sense of survival, cooperation, railroads and the culling of Buffalo all contributed to the success and building of the USA we know today.

The border is marked from North to south and slowly creeps across the continent over the centuries. It begins in Jamestown 1607. That is the real start. You could imagine a scene of coastal towns and settlements from Canada down to Florida. The land around was farmed but it was the British settlements that saw western expansion. The French and Dutch were happy to just settle and trade and set up farming communities. 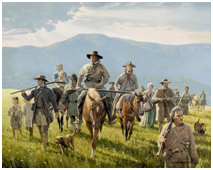 The expansion led to inevitable tension as the British moved out of the trial areas. War with France featured as the American continent simply became another front in their European war. Both sides would curry favour with the local tribes to bolster the troops and something of civil war began between them. The most notable is the Hurons for France and the Mohawks for the British. There was also conflicts with the other tribes as well ending in the enforced movement and subjugation or extinction. The local tribes were in the way and the force of European endeavour and the psyche of Manifest destiny the need to move ever westwards almost as a religious cult.

So, it wasn’t until the Great Revolution some one hundred and eighty years after the first settlement that the independence of America was born. It is after this date that the drive to colonise the continent and push out the local people really begins.