Skip to content
home Health and Fitness Sleep paralysis: what it is, why it happens and how to avoid it
Spread the love

Sleep paralysis is a disorder that occurs shortly after waking up or while trying to fall asleep and that prevents the body from moving, even when the mind is awake. Thus, the person wakes up but cannot move, causing anguish, fear, and terror.

This is because during sleep the brain relaxes all the muscles in the body and keeps them still so that energy can be conserved and sudden movements avoided during dreams. However, when there is a problem with communication between the brain and the body during sleep, the brain can take time to return movement to the body, causing an episode of sleep paralysis.

During each episode, it is possible for hallucinations to appear, such as seeing or feeling someone next to the bed or hearing strange noises, but this only happens due to excessive anxiety and fear caused by the lack of control of one’s own body. In addition, the sounds heard can also be justified by the movement of the muscles in the ear, which continues to happen even when all other muscles in the body are paralyzed during sleep.

Although sleep paralysis can occur at any age, it is more common in teenagers and young adults between the ages of 20 and 30, being related to poor sleep habits and excessive stress. These episodes can happen one to several times a month or year.

Symptoms of sleep paralysis that can help identify this problem are:

While troubling symptoms such as shortness of breath or a feeling of floating may arise, sleep paralysis is not dangerous, nor is it life-threatening. During episodes, breathing muscles and all vital organs continue to function normally.

What to do to get out of sleep paralysis 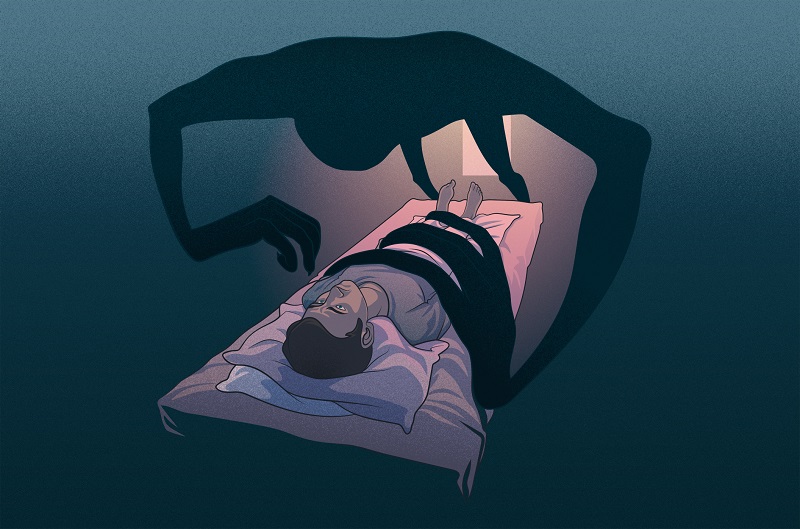 Sleep paralysis is a little-known problem that goes away on its own after a few seconds or minutes. However, it is possible to get out of this paralyzed state more quickly, however, when someone touches the person having the episode or when the person can think logically at the moment and focuses all their energy on trying to move the muscles.

The main causes that can cause a person to experience an episode of sleep paralysis are:

In addition, there are reports that these episodes can be caused by sleep disorders, such as narcolepsy and some psychiatric illnesses.

How to prevent sleep paralysis

Sleep paralysis has been more frequent in people with poor sleep habits and, therefore, to prevent episodes from happening, it is recommended to improve sleep quality, through strategies such as:

In most cases, sleep paralysis appears only once or twice in a lifetime. But when it happens more than once a month, for example, it is advisable to consult a neurologist or a doctor who specializes in sleep disorders, which may include the use of antidepressant medication, such as Clomipramine.