The island of Crete and the smaller islands to visit, between beaches and attractions to visit for an unforgettable holiday.

Together with you, we will begin a journey among the small atolls of Greece not to be missed. A treasure hunt in the wonder that will make us discover sparkling nature, a slower time to appreciate things, and many villages that have centuries-old traditions. Don’t waste time and follow us.

This wonderful island is located between the coasts of Crete and North Africa. It is the southernmost piece of land in Europe and extends for just 30 kilometers. Gozzo (Gavdos in Greek) will give you paradisiacal beaches and an arid and barren landscape that will captivate you with its colors. Already the poet Callimaco referred to it as the “house of Calypso”. For centuries, the inhabitants lived in tiny one-story houses, with a stable, warehouse, and large kitchen that also served as a bedroom. Your walk will take you to know as well several churches. Among the beaches not to be missed is Potamos, known for its reddish sand.

Another small pearl that will give you a dream nature. In the southwestern part of the islet, near a small pier for boats, you will see the island’s only beach, set in an ancient carved bay: accessed via a stone staircase. Mikronissi is located off the southern coast of Crete in the Libyan Sea. It is located in a bay between the headlands of Lithino and Kefala, in Kommos, and near Gortyn which was the ancient capital of Crete.

It is another place of breathtaking beauty: a tropical-looking island located 15 kilometers from Ierapetra on the southern flank of Crete. You will find pristine white beaches, shells, corals, and Lebanese cedar forests i. The clear waters are ideal for snorkeling. The island is a protected nature reserve and is a natural habitat for lizards, rabbits, turtles, and even monk seals. The highest point is a small hill of just 30 meters. Among the attractions, you can visit are the ancient salt pans, the Roman tombs, the lighthouse, and the old pier.

This small lizard-shaped atoll rises 12 kilometers from the town of Heraklion. It is just 5 kilometers long and offers numerous rocky coves with 4 main beaches. Agios Georgios is the only port on the island and offers a beach of very fine sand. The island of Dia is a protected area and also includes two islets: Petalidi and Paximadi. It is the perfect destination for a few hours trip also due to its historical importance. Several wrecks and the remains of the so-called Cyclopean Walls were found here, destroyed in 1450 BC, after the eruption of the volcano Santorini.

Now we move to Crete to visit one of its most important cities: Gortina. It will tell you a history spanning more than 6000 years and will show you one of the most important archaeological sites in all of Greece. There are several versions of its foundation: according to legend, it takes its name from its founder Gortys, son of Radamanthys, king of Festos, and brother of Minos. The archaeological remains, which occupy a large area of ​​land, give us back a populous city. Probably built with a stone of Roman extraction near the village of Ambelouzos, known as the Mesara Labyrinth.

The Praetorium, the palace of the Roman governor, preserves the most extensive remains. A huge baptismal font was built in the second century and rebuilt 300 years later. And which was used as a monastery at the time of the Venetian occupation. In the area, marble columns and other ruins have appeared that allow a glimpse of what is hidden under an old millenary olive tree.

This Cretan town is one of the three on the island to have no access to the sea. What will strike you above all will be its valley surrounded by large mountain ranges that create gigantic natural walls. Inside the valley, you will find Mount Ida with its famous Ideon Cave, the birthplace of Zeus. Within this area, we can find all the varieties of flowers that can be imagined, immense meadows of anemones, gladioli, and daffodils.

The queen of the place is undoubtedly the wild orchid. The Amari valley is dotted with small villages, many of which are over 700 years old. Ancient Venetian bell towers, churches, and numerous caves make up this idyllic landscape.

With our excursions, you will be the protagonist of a journey through time, which will take you back to Knossos, an archaeological site that contains the remains of the Minoan civilization. In the ancient palace stood the religious and administrative centers of the entire region. You will be able to immerse yourself in ancient traditions, discovering the village of Peza, where wine has been produced since the Minoan age. You can walk around the archaeological site of Vathypetro or take a selfie in front of Mount Juktas.

You cannot miss the visit to Heraklion, known as Heraklion. Its history will bring to light the Venetian domination that left several works: the loggia, the Morosini fountain, and the fortress. Nature will be another element not to be missed on the island, discover the beaches of Crete.

Other islands of Greece 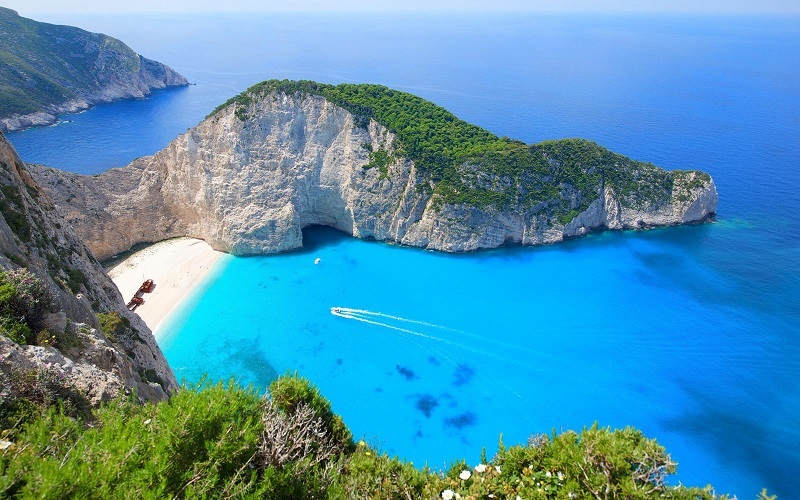 The fun never ends on a cruise: we will take you to Corfu to let you experience the most panoramic viewpoints, but also the beauty of the smaller islands: Pontikonissi and Vlachernas. Without forgetting the historic center, a Unesco World Heritage Site. The fun will be on the scene in Mykonos. But above all the beach life. Impossible not to stop at Paradise Beach, a Caribbean corner of white sand and clubs that never close.

For a special experience choose an off-road tour. We suggest an unforgettable point of view: the Capo Armenisti Lighthouse. Don’t stop and follow us again to Santorini where we thought of a moment full of color in the thermal springs of Palea Kamen. You can even snorkel under the manor of Agios Nikolaos.