The curiosities of the Faroe Islands begin with their special topography and the unique view they offer from the air. This place is full of surprises, all of them wonderful.

The Faroe Islands are located in the North Atlantic, between Iceland and Scotland. They are an autonomous region that belongs to the Kingdom of Denmark. Among the many curiosities of the Faroe Islands, its unusual beauty and an exemplary model of coexistence can be highlighted.

This archipelago, made up of 18 islands and more than 750 islets, covers an area of ​​1,300 square kilometers, with more than 1,100 kilometers of coastline. It has rugged geography and geology dominated by cliffs and low mountains, where seagulls and puffins nest. Here are six more facts about this curious corner of the planet.

By the year 625, the islands were inhabited by monks, then by pirates, and finally by Vikings, who ended up taking them over. The origin of its name comes from Danish and means ‘Islands of the Lambs’. The reason is simple: the population of sheep is twice that of humans.

The economy of these islands depends fundamentally on fishing, especially shellfish, salmon, and mackerel. Its number of inhabitants is small, approximately 50,000 people.

From this data, it can be affirmed that they have the largest number of Nobel Prizes per capita: one, awarded to Niels Ryberg Finsen, who won the Nobel Prize for Medicine and Psychology in 1903. There are more than 80 different nationalities in its territory, whose life expectancy is 80 years.

2. Special customs, one of the curiosities of the Faroe Islands

Vegetation is scarce, especially trees, particularly due to the strong winds that prevent their development. The Faroese compensate for this absence with the ingenious idea of ​​covering the roofs of their houses with grass, which also provides shelter from the bitter cold.

In the Faroe Islands, houses have grass on the roof.

Among the best curiosities of the Faroe Islands is that public transport is free. In addition, it is a place where traffic is not a problem: three traffic lights are enough to regulate vehicular traffic. In this paradise, there are also no branches of the powerful American company McDonald’s.

The sale of liquor that exceeds 2.8° of alcohol is an exclusive monopoly of the State; It is only sold in six stores throughout the country and its price is high. Unfortunately, not everything is perfect, since around 800 whales are still hunted each year, in part because their ancestors have been doing it for more than 1,000 years.

3. The national language and sport

Although most Faroese speak English, the official language of these islands is Faroese. It is a Scandinavian language that originated from Old Norse at the time when the Vikings settled on the islands.

As for sports, without a doubt, football is the most popular in this territory. It brings together about 20% of the population as registered players, not counting all those who play it for fun; it is something without precedent in the world and that is part of the curiosities of the Faroe Islands.

The Faroese Football Association was created in 1942 and has been responsible for organizing the Effodeildin league since 2008. The Faroese Premier League has 10 teams and is currently ranked 51st by UEFA.

Within the ancestral tradition of the Faroese, there is a legend to explain the loneliness of the island of the peaks. It is said that an eagle kidnapped a child and took him to his nest; his mother, to rescue him, climbed one of the five peaks to this place. However, she found her son dead and without eyes. Since then, the family has left Trundholm Island forever.

The island of peaks in the Faroe Islands is a true natural attraction.

In the Faroe Islands, after leaving the main roads, the roads that lead to the towns only allow the transit of one vehicle, even if they are two-way. To solve this problem, the authorities set up areas every 150 meters so that vehicles can park momentarily to give way to those coming from the opposite direction.

This situation, more than a nuisance, has become the perfect excuse to rest, relax, and even take pictures of the extraordinary landscape. Without a doubt, one more of the curiosities of the Faroe Islands that are most striking for visitors.

Within the field of the arts, music, and dance stand out. The first is characterized by being mainly vocal and not accompanied by musical instruments. In the past, only violin accompaniment was allowed in its capital, Torshavn.

As for the dance, the tradition of the chain dance is kept alive, a dance prohibited in the past by the Church as it was considered pagan. In this group dance, a circle is formed that rotates, while its members dance. Spontaneously, one of the members breaks the circle and goes to the center to express himself individually; then he returns to the circle and so on the dance continues.

On the side of traditional cuisine, revolves around fish and lamb meat. The aim is to take advantage of absolutely everything from the latter, which is why soups, sausages, and black pudding made from this animal are common. 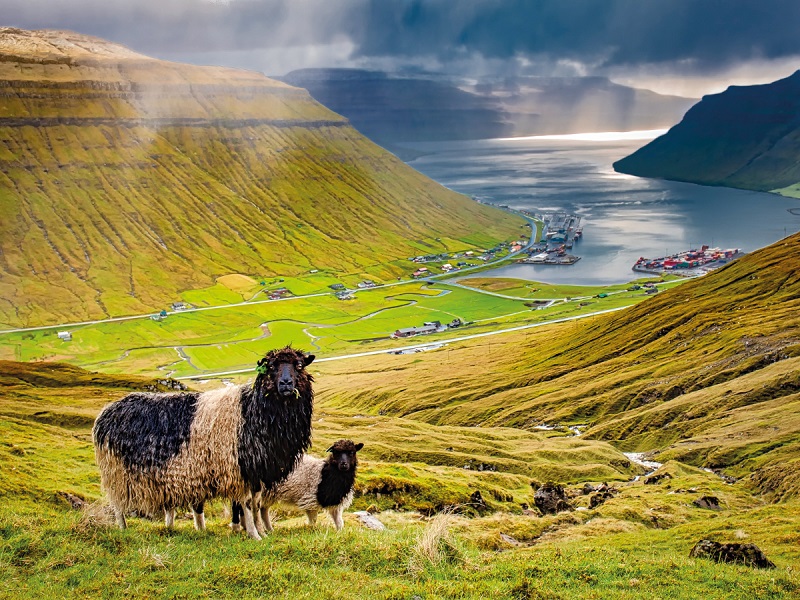 Finally, one of the greatest attractions of the Faroe Islands is the presence of the Northern Lights. The phenomenon, which can be observed between September and April, is not only beautiful but always different, to illuminate the sky and the lives of those who are lucky enough to witness them.

Seen from the air, the Faroe Islands look like raw emeralds, shrouded in thick fog and frigid waters. They are the preferred destination for those who have already seen it all. In short, a place that can only be enjoyed slowly.

These islands are a humid space where the rivers hang from the mountains like melancholy seas to welcome visitors. In addition, they have a culture so warm that even the cold is warm, where you learn to be patient because nothing is said and changes happen from one moment to another.