Skip to content
home Reviews A visit to Turkey would not be complete without it.
Spread the love

Should you ever go to Turkey it might be an idea to take a day away from its beautiful beaches and take a trip, or even spend a few days, at the famous “Cotton castle” of Pamukkale. You can find some wonderful Luxury Villas in Turkey that will give you a great base to explore these beautiful areas. It is worth taking a look at kas4villarentals.com  to see what they have available.

Pamukkale is a rare and wonderful natural phenomenon where travertine, created by naturally setting calcium carbonate, has formed pools over the millennia’s. It is a type of sedimentary rock that is derived from the flowing water that is in abundance in the area. A total of 17 hot springs provide temperatures of anywhere between 35 to 100 degrees centigrade. In the past these terraces could be bathed in but following intervention by the Government and UNESCO tourists are banned from entering them as the erosion by visitors and pollution of the water is considerable. However, there is still a maintained and managed footpath that allows visitors a chance to view the magnificence of the pools.  Previously, hotels were built on the site to maximise the tourist potential and it was not unusually to see motorcycles being ridden up the slopes. This damage was irreparable but the site is now heavily controlled by the Turkish government in conjunction with UNESCO since the declaration that the site is of significant world heritage importance. 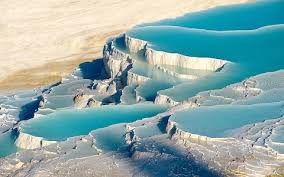 While the natural environment is a huge draw there are other reasons to visit Pamukkale. The site was once the Roman outpost city of Hierapolis. The Romans, being big on health and bathing, must have loved the site and there is evidence that it was used as a rest and recreation centre or a place to retire to very similar to our own town of Bath, or Aquae Sulis in Wiltshire. Hierapolis translates as Holy City and it is clear from the evidence that the locals and their Roman overseers certainly considered the place to be blessed by the Gods. 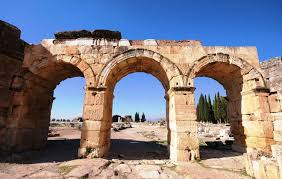 This stems from not only the unusually look of the site, which must have seemed very strange, but also to the invigorating water and its healing properties. The fact the water was hot and yet there wasn’t a fire underneath it must have been an incredible revelation. Many baths were built and so were Gymnasiums, a vast auditorium, a large library and a huge temple to Apollo and other major deities of the Greco-Roman period. A museum at the site contains many of the finds and model examples of how the city and the site may have looked.