Skip to content
home Food and Drink The 7 types of sushi: its ingredients and characteristics
Spread the love

We tell you about the 7 different types of sushi that exist in Japanese cuisine, according to their presentation, preparation, and ingredients that each type of sushi carries.

Sushi arrived many years ago to the West and remained as one of our favorite dishes because of its flavor, freshness and particular format, which stimulates both taste and sight.

Now, if you are a foodie addicted to sushi, you will have noticed that not everything in this unique dish is the same and that there are different types of sushi according to their presentation, ingredients, and preparation. We explain everything to you so that you become a sushi expert. 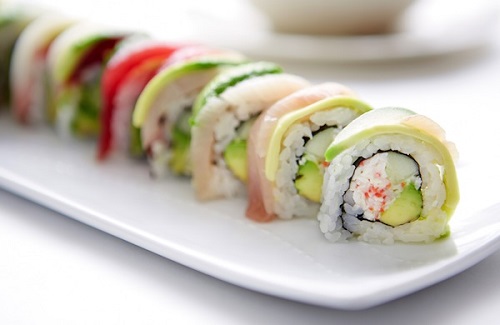 Sushi is a type of cuisine that we know as Japanese, although its true origins are in ancient China, where fish was preserved with the mold they obtained from fermented rice that was not eaten. It does not sound appetizing, right? In any case, it is because the Japanese adopted it as their own and evolved this dish, that today we have the pleasure of eating different types of sushi and enjoying its special flavor.

You will be surprised to know that when we explain what sushi is, we do not talk about fish as the main ingredient, but actually, it is a dish of rice that is eaten in combination with other ingredients (such as fish) that are They give specific forms like rolls that become the pieces of sushi that we eat.

Sushi, as its name translates, is a dish of cooked vinegary rice, since Su translates to vinegar and Shi-Meshi rice. Then, rice is the main ingredient of this delicious dish and the ingredient from which it gets its particular flavor. This rice is accompanied by raw fish and vegetables that are used as the stuffing of the pieces of sushi, so some people do not dare to try it. Once ready, it is served with soy sauce, wasabi and ginger.

The ingredients in the sushi have another name

Before starting with the types of sushi there is something you should know first, and this is its ingredients. When you approach a sushi menu you will notice that, although they are ingredients that we know (in addition to the rice that we already mentioned), they have different names, due to their Japanese roots.

You will have noticed that a green colored sheet is used in the different pieces of sushi. This is a fundamental ingredient for some of the types of sushi and is actually a sheet of seaweed. But in sushi, we call it nori. Following with the fish, usually raw, the most used are salmon, which you find under the namesake; the tuna, which is under the name of maguro; and the eel, which they call, unagi.

Shellfish are also protagonists in this Japanese dish, where the most popular are prawns, which take the name of ebi, and octopus, which takes the name of tako. Following the ingredients from the sea is very common in your pieces you find some gelatinous balls of red or orange. These are fish roe and there are different varieties, but the most used are the masago.

In some cases, and even more so in fusion cuisine restaurants. You can find pieces of sushi made with other types of meat such as chicken or ham. As for vegetables, avocado, cucumber, carrots, and asparagus are the protagonists par excellence, essential for vegetarian sushi options.

The 7 types of sushi and their varieties

The secret to identifying the different types of sushi is paying attention to the shape and size of each of the pieces of sushi on your plate. 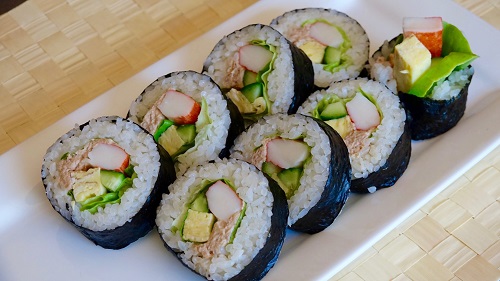 The maki is literally a sushi roll and the first image that comes to mind when you think of sushi. It is rolled on a sheet of nori seaweed, rice, fish and vegetables, these being the ingredients of the stuffing and the nori seaweed the edible wrap. When the roll is ready, it is cut into approximately 2 cm pieces that remain in a circle shape.

Keep in mind that the sushi maki can vary depending on the thickness of the piece; the type of sushi that is very thin we call it hosomaki and if, on the contrary, the pieces are very thick, they are called futomaki. 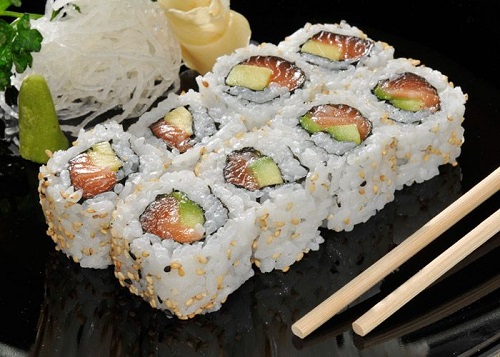 If in the makis the nori seaweed is what we see on the outside of the pieces of sushi. Because in the uramakis it is the other way around. The rice is what we see as the wrapping of the pieces and the nori seaweed is as a filling together with the other ingredients. This type of sushi is called “Ura”, which means “opposite face”. Just because we roll it on the opposite side of the maki. 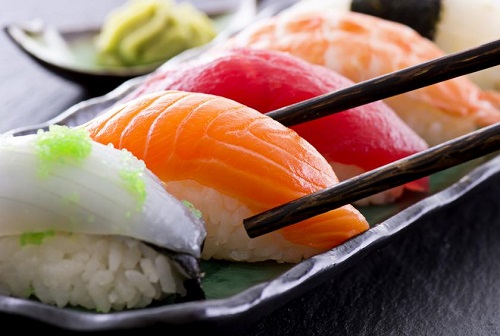 If you look at a tray that contains the different types of sushi. You will notice that there are some pieces that. Instead of having the usual round shape, are rather elongated and without algae. These are the nigiri.

The nigiri is a piece of sushi that does not carry nori seaweed and that does not roll either. These are pieces of rice that are kneaded with an elongated shape and covered with raw fish or seafood. In some restaurants, to change the presentation, they use a piece of very small nori seaweed around the nigiri as if it were a kind of decorative ribbon.

A trick to eat nigiri: when you dip it in the soy sauce, make sure to dip it on the side where the fish is. But never on the side of the rice, because it will easily fall apart. 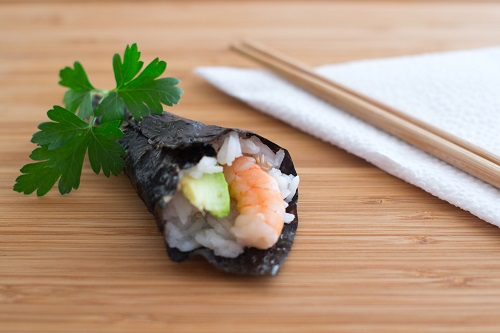 The temaki is a type of sushi designed for those who do not want to use the sticks and prefer to eat by hand. At least that’s what his name says, because “you” means “by hand”. The temaki are prepared on a sheet of nori seaweed that includes the rice and the different ingredients. But it is not rolled up like a “burrito” to cut the pieces, but it is done giving it the shape of a cone so that hold with your hand while you eat it. 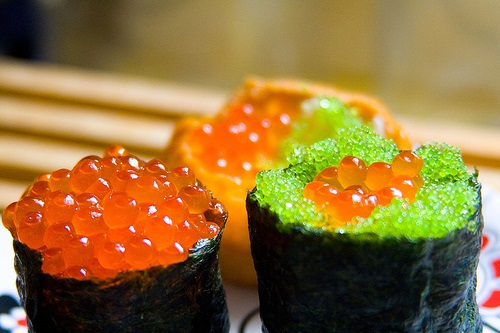 The gunkan is a piece of sushi similar to the nigiri but is wrapped in nori seaweed. As if the seaweed was a container bowl or a boat, hence it’s named that means “boat”. The most popular of the gunkan is the one prepared with orange salmon roe. 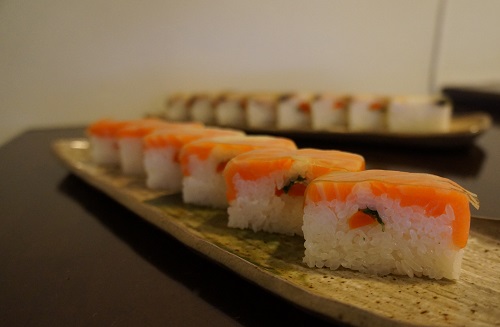 Not many restaurants serve this type of sushi, which differs from the others because it is prepared with a mold that gives it its square shape. In this mold, an important base of rice is placed and on it the nori seaweed and the selected ingredients. 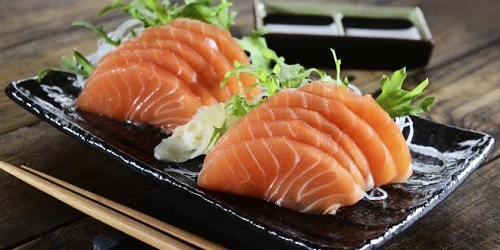 Sashimi is not really a type of sushi, but they are part of this type of cuisine. The sashimi consists only in sheets of raw fish that we eat alone or wet in soy sauce. Since they do not carry rice, we can not call them sushi. But you should know it because they always accompany this type of dish.