I think to Western people Hiroshima is not a name of city in Japan but the name of a Bomb. In fact it’s a beautiful and historical city but no can forget, especially the Japanese, that at 8.15 on the 6th of August 1945 time in the city stood still as ‘Little Boy’ exploded 600m above the ground.

Before we tell you of our ups and downs of this city lets start with another Japanese lesson. When saying Hiroshima correctly skip over the ‘O’ remember they don’t elongate vows like we do.

We had a three-night stay in this famous city, no shows though just a stop over for a long journey to Beppu. We arrived on Friday but after a long drive we where quite tired and had an early night. The next day we all set out to explore the city. Richard and Bobbi went to visit the Hiroshima castle, originally Built by Mori Terumoto in 1952 it was destroyed by the A-bomb and was partly rebuilt in 1958 as a history museum. The Castles compound is situated completely on island in the middle of the city (though there was no city when it was built). The island is partly man made by the original builders, an inspiring feat for the 16th century. Inside the castle was a collection of swords and amour from real Samurai’s as well as other historical artifacts from Hiroshima. It was exciting to experience something older from the city then the last horrific century. 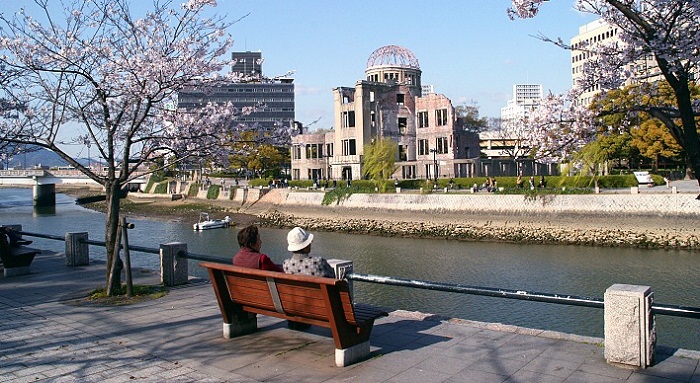 That evening we met up with our escort Ms. Yamashiro, a member of Labo and her son who kindly offered to show us around. We started off the evening with a traditional Hiroshima dish called Okonomiyaki. Its cooked on a hot plate, starting with a thin pancake, then filled with veg, meat and sauce before being topped off with a fired egg. You eat it directly off the hot plate with a kind of scoop. Traditionally it comes from the A-bomb aftermath when food was scarce and this dish combined easy to find resources. Afterwards her son took Richard and Bobbi to his favorite local bar, we sat on the balcony, the bar being on the 4th floor, and looked down to the bright and colourful Hiroshima Street.

The following morning at 9am (our poor heads) we met at the A-bomb Dome. This is the only building left from the destruction, being almost underneath the explosion its walls where not blown over and its frame still stands like a Skelton. The four of us, together with Ms. Yamashiro and her tour guide friend and family, set of around the peace gardens. It was very beautiful and peaceful and allowed people to remember their ancestors who had died in the bombing. Next came the museum, it was terrifying, we all know what happened but actually being there was different. (Its like visiting Ground Zero or the Ann Frank museum, it suddenly makes it very real and personal to you) About 130,000 people lost their lives, the lucky ones strait off and those unfortunate enough died within the next 4 months of radiation poisoning. The museum goes into detail of the bomb development, picking of Hiroshima as a target and everything else in the planning stages as well at the post-bomb aftermath. It was very harrowing and although we don’t want to go into much detail of the horrific things we learnt, we suggest going to the museum yourself if you’re ever in Japan. One last note, Japan has no nuclear weapons like much of the rest of the world and companies for their end. More Reviews on http://apporello.com/